THROUGH THE INTERCESSION OF

As pastor of St. John Neumann Roman Catholic Church, my belief and conviction is that a community will grow first of all by:

The Eucharistic Community that we have become and grown into is certainly due in many ways to our patron saint, Saint John Neumann. Through his intercession within our various praying ministries, many miracles have happened, doctors have written letters about the disappearance of diseases and God has truly become present among our people. His nine-day novena has been a source of strength, hope and consolation to many.

I write this article so that all would consider getting to know our patron saint more personally. Books, medals and other articles of St. John Neumann are available at the rectory. 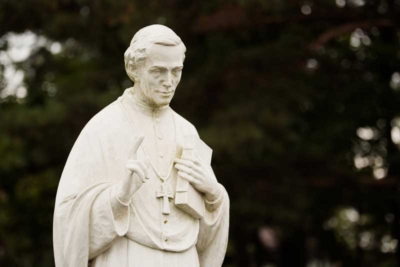 John Neumann was born on March 28, 1811, in Prachatiz, Behemia. Because of the example of his parents, John always desired to serve God as a priest but due to illness his ordination was put off indefinitely. In addition, his diocese had enough priests at that time, contrary to our day and age. John, who had always wanted to be a missionary in America, wrote to several bishops in the United States and in 1836 he came to this country, uncertain as to where he would go.

On June 25, 1836, John was ordained by Bishop Dubois of New York at old St. Patrick’s Cathedral in New York City. He then became pastor of the whole Niagara frontier, some 100 miles of swampy, primeval forest. Although small in stature, five feet four inches, he was sturdy and would walk miles through dangerous forests in snow, rain or heat to bring the consolations of God to the sick and the dying.

Father Neumann set up many schoolhouses; however, after four years and complete disregard for his own physical welfare, he collapsed from exhaustion. This period was a time of turmoil for Saint John and in 1842 he made a decision to join the order of the Redemptorists. His first assignment with them was to the Redemptorist Church of St. James in Baltimore. In 1851 he was appointed rector of St. Alphonsus Church in Baltimore.

In 1852, Pope Pius IX appointed John Neumann as the fourth bishop of Philadelphia. He established many schools and during his episcopacy the number of parish school children increased from 500 to 9000 in thirty months while a total of seventy-three new church and chapels were built. It is Bishop Neumann who established the first diocesan program of Forty Hours and always wanting to help his people, Bishop Neumann wrote two catechisms. Among numerous other contributions, Bishop Neumann founded a religious order for women, The Third Order of St. Francis of Glen Riddle.

On the morning of January 5, 1860, Bishop Neumann was not feeling well. But mindful of his lifelong habit of never wasting a minute, he planned to take a walk and do a few errands. To a brother Redemptorist he had confided in the morning the following: “I have a strange feeling today. I feel as I never felt before. I have to go out on a little business and the fresh air will do me good. A man must always be ready for death comes when and where God wills it.” As he walked along Vine Street near Thirteenth, his steps became uncertain and he was seen to stagger. A moment later he fell to the ground. In a matter of minutes he died of apoplexy in his forty ninth year of life.

Bishop Neumann was laid to rest in the Redemptorist Church of St. Peter at Fifth Street and Girard Avenue, Philadelphia. His earthly remains were placed under the main altar clothed in the vestments of his Episcopal office and encased in a cover.

This, in the usual course of events, would have been the end of the story. But with John Neumann, the usual course of events did not follow the normal pattern. Out of their deep love for “The Little Bishop” the people began to make it a habit to pray at his tomb. What was unusual was that people prayed not for him but to him. People began to petition him for favors, recovery from illness, for help with their challenges in life. As time went by, stories were heard and repeated of the marvelous things which had come to pass after prayers had been invoked to Bishop Neumann. In 1885, twenty-five years after his death, application was made to Rome for the introduction of the cause of his beatification. Ten years later, Pope Leo XII accorded to Bishop Neumann the title of Venerable and in 1921 Pope Benedict XV declared that Bishop Neumann was ‘Heroic in virtue.”

As the long slow process toward Bishop Neumann’s beatification continued, two miracles, which resulted from prayer to “The Little Bishop” were approved by the Church.

In May 1923, in the town of Sassuolo, near Milan in northern Italy, an eleven year old girl named Eva Benassi was suffering from headaches, abdominal pains and fever. Her doctor diagnosed the case as tubercular peritonitis. Eva’s condition grew steadily worse. One day the doctor told the girl’s family that death was imminent and could be expected that night. A nun of Eva’s school organized prayer to Bishop Neumann for healing and touched her swollen abdomen with a picture of the bishop. That night the disease disappeared.

On July 8, 1949, Kent Lenahan Jr. of Villanova, Pa., was critically injured in an automobile accident. His skull was crushed, one eye was almost torn from its socket and he was bleeding from the ears, nose and mouth. At the hospital, he lingered for four days between life and death. His condition was regarded as hopeless. He had a 107 degree temperature and his pulse was rapid. His mother obtained a portion of Bishop Neumann’s cassock and laid it on her son. His temperature dropped to 100 degrees and his pulse was almost normal in a matter of hours. Within a few days his injuries were well on the way to complete healing and five weeks later he left the hospital in excellent health.

Pope Paul VI, on October 13, 1963, listed Bishop Neumann among the heavenly Blessed. One further healing was needed for sainthood.

In 1963,, when he was six, doctors gave Michael P. Flanigan of West Philadelphia, Pa., six months to live. He had an incurable case of Ewing’s sarcoma, a bone cancer of legs, jaw and lungs. Several times his parents carried him to the Neumann Shrine at St. Peter’s. His mother pinned a relic of Bishop Neumann to his pajamas. Six months after the diagnosis was made there were no signs of the disease.

In addition to these miracles, many, as I said above, have happened here at St. John Neumann. I obviously could never prove that statement but it is something I firmly believe from the bottom of my heart. I encourage parishioners to seek the intercession of our patron saint as well as Mary, the mother of Jesus. I encourage you also to bring your needs to our praying ministries, to a holy hour in front of the Blessed Sacrament and above all to the Eucharistic celebration on weekends. The power of God is unbelievable and has truly been at work within our praying community.